History of the Shrine

Beginnings of the Shrine

Birth of "The World's greatest Philanthropy" 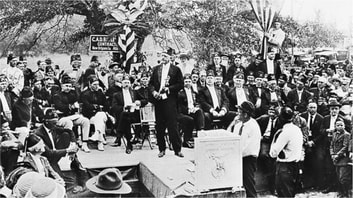 Placing the cornerstone for the first Shriners Hospital
In 1919, Freeland Kendrick (Lu Lu Shriners, Philadelphia) was the Imperial Potentate-elect for the 363,744 Shriners. He had long been searching for a cause for the thriving group to support. In a visit to the Scottish Rite Hospital for Crippled Children in Atlanta, he became aware of the overwhelming orthopaedic needs of children in North America. As Imperial Potentate in 1919 and 1920, he traveled more than 150,000 miles, visiting a majority of the 146 temples to campaign for an official philanthropy.

At the June 1920 Imperial Session in Portland, Ore., Kendrick proposed establishing Shriners Hospital for Crippled Children (now Shriners Hospitals for Children), to be supported by a $2 yearly assessment from each Shriner (now $5 per year).

Conservative Shriners expressed doubts about assuming this kind of responsibility. Prospects for approval were dimming when Noble Forrest Adair (Yaarab Shriners, Atlanta) rose to speak: “I was lying in bed yesterday morning, about 4 o’clock . . . and some poor fellow who had strayed from the rest of the band . . . stood down there under the window for 25 minutes playing ‘I’m Forever Blowing Bubbles.’ ” He said that when he awoke later, “I thought of the wandering minstrel, and I wondered if there were not a deep significance in the tune that he was playing for Shriners, ‘I’m Forever Blowing Bubbles.’ ” He noted, “While we have spent money for songs and spent money for bands, it’s time for the Shrine to spend money for humanity. I want to see this thing started. Let’s get rid of all the technical objections. And if there is a Shriner in North America,” he continued, “who objects to having paid the two dollars after he has seen the first crippled child helped, I will give him a check back for it myself.”

When he was through, Noble Adair sat down to thunderous applause. The whole tone of the session had changed. There were other speakers, but the decision had already been reached. The resolution was passed unanimously.

A committee was chosen to determine the site and personnel for the Shriners Hospital. After months of work, research and debate, the committee concluded that there should be not just one hospital but a network of hospitals throughout North America. It was an idea that appealed to Shriners, who liked to do things in a big and colorful way. When the committee brought the proposal to the 1921 Imperial Session in Des Moines, Iowa, it too was passed. 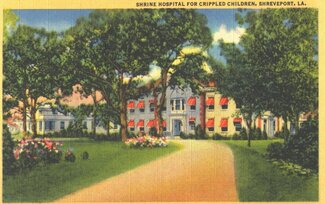 Shriners Hospital for Children - Shreveport, LA
Before the June 1922 Imperial Session, the cornerstone was in place for the first Shriners Hospital for Crippled Children in Shreveport, La. The rules were simple: To be admitted, a child must be from a family unable to pay for the orthopaedic treatment he or she would receive (this is no longer a requirement), be under 14 years of age (later increased to 18) and be, in the opinion of the chief of staff, someone whose condition could be helped.

The Shriners Hospitals network is supervised by members of the Board of Trustees, who are elected at the annual meeting of the hospital corporation. Each hospital operates under the supervision of a local Board of Governors, a chief of staff and an administrator.

The first patient to be admitted in 1922 was a little girl with a clubfoot, who had learned to walk on the top of her foot rather than the sole. The first child to be admitted at the Twin Cities hospital was a boy with polio. Since that time, over 1.5 million children have been treated at the 22 Shriners Hospitals. Surgical techniques developed in Shriners Hospitals have become standard in the orthopaedic world. Thousands of children have been fitted with arm and leg braces and artificial limbs, most of them made at the hospitals by expert technicians. 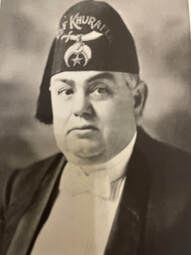 Illustrious Sir Julius W Ippel
Potentate, 1921
Some time prior to June of 1906, a northern group of Moselm Shriners came to the realization that Detroit was a long way to travel to participate in Shrine activities. Nobles from Flint, Saginaw, Bay City, Midland and locations farther north petitioned the Imperial Council to charter their own temple. Imperial granted dispensation in June of 1906 to create a new temple, located in Saginaw, Michigan. After many meetings to draft official by-laws and set the standards of the temple, Imperial chartered its 99th temple – Elf Khurafeh Shrine Temple.
​
Elf Khurafeh translates to “1,000 gathered fruits,” and was chosen to signify the silliness and joy these nobles intended to bring to Mid-Michigan. Apparently, word spread quickly that these nobles were a good group to be around. Membership was increasing at a pretty good clip. Then in April of 1910, the Imperial Council abolished concurrent jurisdiction among the three Michigan temples, and established certain assigned territorial jurisdiction for each temple. Elf Khurafeh was given jurisdiction of 26 counties in the northeastern portion of the Lower Peninsula. Records show that membership had already reached 681 members by the time the annual report was issued in December of 1910.

Initial meetings were held at the Saginaw Masonic Temple. In 1924, an announcement was made that a new temple would be built to house the growing membership. Completion of the present Temple Mosque and Temple Theater was completed in its current downtown Saginaw location, with an elaborate opening in August 1927. 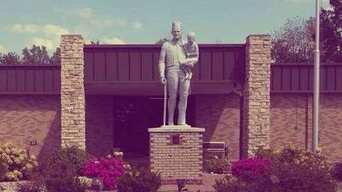 Entrance to Circus Park in Clio, MI
Several years ago the Temple purchased 101 acres of land in Clio, Michigan, about halfway between Saginaw and Flint. This land has been developed for the use of the members from the entire jurisdiction. There is a large activities building on the grounds, along with a pavilion and picnic area as well as rustic camping facilities. At the present time Circus Park is being used as a meeting place for several Clubs and Units as well as many Temple Functions. It is a beautiful facility and one which the members can be proud of.
​
Temple membership on January 1, 2016 was right around 1,400 with many Temple and Club sponsored Units, and many more Shrine Clubs in operation as of that date. Th e works of these Units and Clubs have played a prominent part in the Temple's success over the years.

Elf Khurafeh has multiple fundraising events each year: the Shrine Circus, a Sportsman's Raffle, Shriners' Run 5k, and much more. Shriners also sell items like Vidalia onions and raffle tickets to help add to our general fund.  Funds earmarked for the general fund are used for many things, but primarily to fund our property (which houses our transportation unit) and to keep that property in decent repair.  Elf Khurafeh transports patients in our jurisdiction to either the  Shriners Children's - Chicago or Shriners Children's - Dayton, depending on the condition being treated.  Like the hospital, the transportation is provided at no cost to the family.
​
Several years ago Elf Khurafeh Temple started their Annual Paper Sale for the benefit of Shriners Hospitals for Children.  This Annual event has allowed Elf Khurafeh to contribute over One Million Dollars to the hospitals.  This is something that the members are very proud of and well they should be.